In Memory of
Leland Carl
Predmore
1934 - 2018
Click above to light a memorial candle.
Memorial Candle Tribute From
Wilson Funeral Home
"We are honored to provide this Book of Memories to the family."
View full message >>>
Plant a Tree In Memory of Your Loved One
Click Here
Menu

In the event that there is an error
in the information presented,
please contact the funeral
home by clicking here. 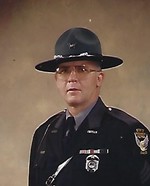 Leland Carl Predmore, 83, of Viera, FL, passed away on Thursday, November 8, 2018 at Wuesthoff Brevard Hospice after a long illness.

He was born on December 3, 1934 in Union County near West Mansfield to the late Charles H. and Blanche (Brookens) Predmore. In addition to his parents, he is also preceded in death by his brother, Charles and three sisters, Phyllis Predmore, Eunice Goings and Ardythe Predmore.

Leland proudly served his country as an Ohio National Guardsman and member of the U.S. Army Reserves, retiring after 40 years as a Colonel. He retired from the Ohio State Highway Patrol as a Sergeant after 21 years of service where he was named Outstanding Patrolman of the Year in 1973.

Calling hours will be held at the Wilson Funeral home, Schnurrenberger Chapel 222 W. Center St. West Mansfield from 4-7 P.M. on Wednesday where funeral services will be held at 11:00 A.M. Thursday. Burial will be held at North Greenfield Cemetery where Military Honors will be conducted by the Logan County Honor Guard. Memorial contributions may be made to the Bethel Church, West Mansfield, and Caring Neighbors food pantry in care of the funeral home. Condolences may be sent to the family at www.wilsonfuneralhomesinc.com


Provide comfort for the family by planting a tree in memory of Leland Carl Predmore, please visit our Heartfelt Sympathies Store.